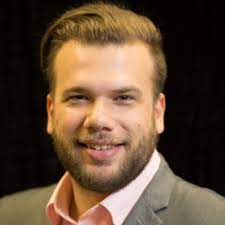 In this talk we will show the use of astrocytes to realize Boolean logic gates, through manipulation of the threshold of Ca2+ ion fows between the cells based on the input signals. Through wet-lab experiments that engineer the astrocytes cells with pcDNA3.1-hGPR17 genes as well as chemical compounds, we show that both AND and OR gates can be implemented by controlling Ca2+ signals that fow through the population. A reinforced learning platform is also presented in the paper to optimize the Ca2+ activated level and time slot of input signals Tb into the gate. This design platform caters for any size and connectivity of the cell population, by taking into consideration the delay and noise produced from the signalling between the cells. To validate the efectiveness of the reinforced learning platform, a Ca2+ signalling simulator was used to simulate the signalling between the astrocyte cells. The results from the simulation show that an optimum value for both the Ca2+ activated level and time slot of input signals Tb is required to achieve up to 90% accuracy for both the AND and OR gates. Our method can be used as the basis for future Neural–Molecular Computing chips, constructed from engineered astrocyte cells, which can form the basis for a new generation of brain implants.

Dr Barros is an Assistant Professor (Lecturer) since June 2020 in the School of Computer Science and Electronic Engineering at the University of Essex, UK. He is also a MSCA-IF Research Fellow (part-time) at the Tampere University, Finland. He received the PhD in Computer Science at the Waterford Institute of Technology in 2016. He previously held multiple academic positions as a Research Fellow in the Waterford Institute of Technology, Ireland.
He has over 70 research peer-reviewed scientific publications in top journals and conferences such as Nature Scientific Reports, IEEE Transactions on Communications, IEEE Transactions on Vehicular Technology, in the areas of molecular and unconventional communications, biomedical engineering, bionano science and 6G. Since 2020, he is a review editor for the Frontiers in Communications and Networks journal in the area of unconventional communications. He also served as guest editor for the IEEE Transactions on Molecular, Biological and Multi-Scale Communications and Digital Communications Networks journals. He received the CONNECT Prof. Tom Brazil Excellence in Research Award in 2020. Dr Barros was awarded also the Irish Research Council’s (IRC) Government of Ireland Post-doc Fellow from 2016-2018 and the Enterprise Ireland’s (EI) Commercialization Funding from 2018-2019.